Reacting to Crisis the Right Way

How can your organization survive a crisis when your lawyer is unwilling to take out a home equity loan and none of your friends own a tabloid magazine willing to “catch and kill”?

Years of experience working with candidates, companies, and other organizations dealing with crisis – some long expected, others totally unforeseen – tell us there are no communications short cuts, even though many keep trying to take them.

Recently, one of the nation’s largest companies learned this the hard way, when Facebook’s Mark Zuckerberg spent two days getting grilled on Capitol Hill. We would argue that he handled himself well in the hearings – as opposed to a few Senators and Representatives who still aren’t quite sure what’s happening on the “interwebs” – and the candor shown during the past few weeks will help Facebook move past the questions being raised. At the same time, we also believe of Facebook’s initial response, and lack thereof from leadership at the outset, led them directly to the high-stakes congressional hearings.

In the wake of Facebook’s high profile public crisis, the Public Affairs Council (PAC) and Morning Consult released timely polling on corporate crises and controversies. The numbers highlight the risks posed by failure to act and strategies that can alleviate some of the pain caused by an early mistake.

As they note, mishandling a crisis is not just a branding question, but can impact a company’s bottom line. Their findings, not surprisingly, show that “Americans are often more likely to quietly halt purchases from a company than to make negative comments about it. This is especially true for ‘high-intensity’ issues such as illegal campaign contributions, sexual harassment and discrimination.”

These findings further illustrate that how you respond to a crisis or controversy can be just as important as the event itself. If a company demonstrates transparency and accountability in the face of a crisis, people are more likely to give it the benefit of the doubt.

So, how can you protect your brand, company, and CEO from being hauled in front of the government for questioning? At Forbes Tate Partners (FTP), we believe there are four crucial steps to navigating a crisis:

By taking these steps during a crisis, you will be able to weather the storm, and in some cases, come out of the situation with stronger public standing.

The first and best thing to do when confronted with a crisis is to gather as much information as possible – a misinformed response plan is doomed to fail. This step is much easier if your house is in order. Time is precious, and your organization cannot afford to waste it by establishing the appropriate internal channels. Without information gathering tools in place, you’ll lose your ability to control the message.

Easy to say, harder to develop and execute. The plan should have every single scenario mapped out with corresponding responses. Making a decision tree helps to develop a rapid response system, so that when the time comes, you can instantly pivot your responses and actions based on the current scenario. Timelines, scenario-specific statements, and specific roles assigned to public facing employees ensure that everyone is on the same page, and ready to execute. By thoroughly planning your response, you diminish any chance the organization is caught off guard by the ever-changing landscape of public reaction.

Publishing documents, including one-pagers, statements, and explainers can save the team time and assure reporters that you are giving them access to everything they need. If we could distill our approach here, we would say it involves aggressively addressing the situation, demonstrating understanding and transparency, and fighting hard to get back on message quickly. The more information you share upfront, the better you are able to pivot back to the facts.

Know When to Say Sorry

A key finding from the Morning Consult report is that an old-fashioned mea culpa can make a big difference in how your brand is trusted in the aftermath of the crisis. For example, when a company executive is fired for breaking the law, 58 percent of survey respondents said they would feel more favorably toward the company that apologized, as opposed to 41 percent of respondents who would feel more favorably without an apology (Exhibit 1). 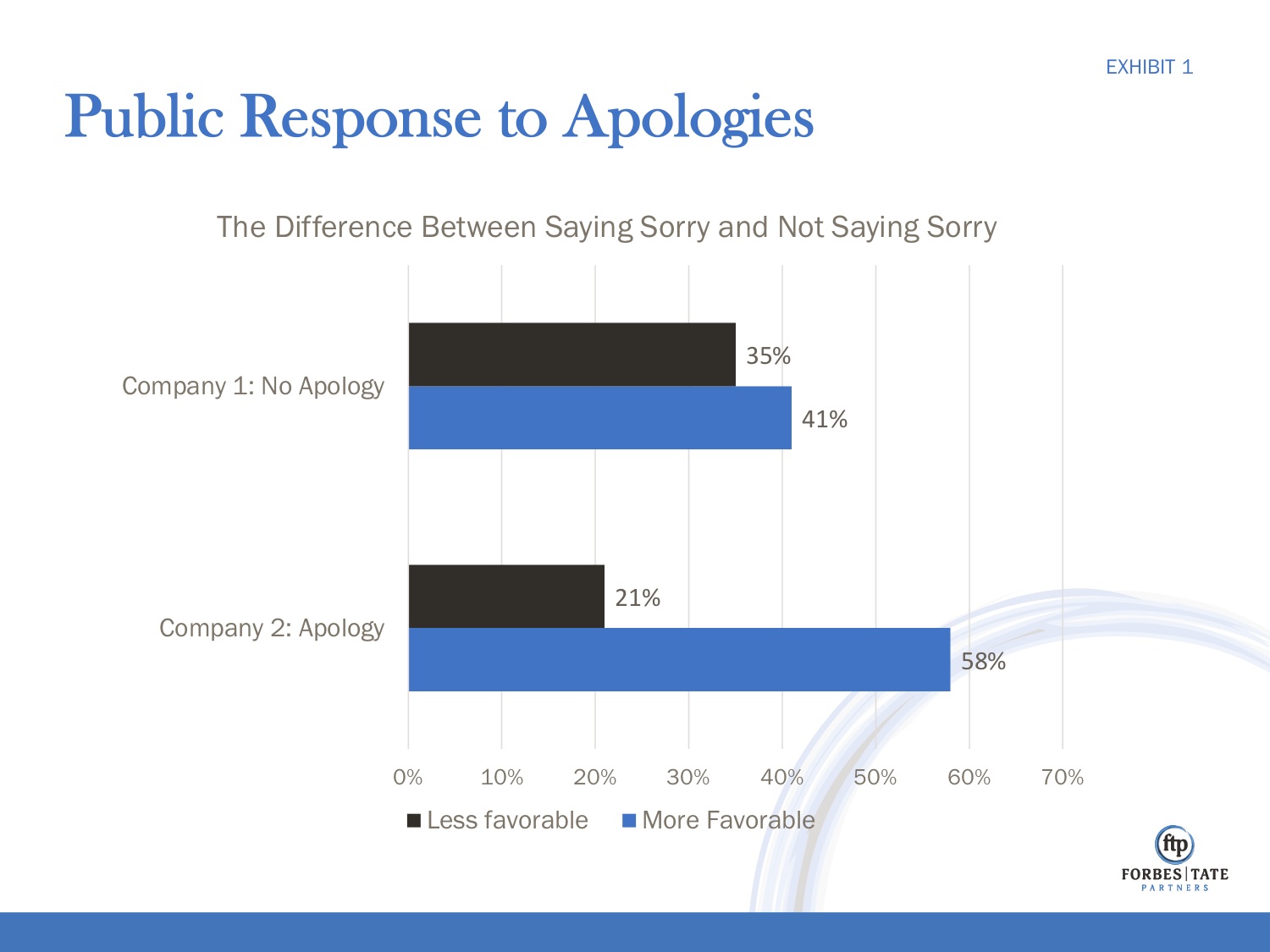 The takeaway? Take responsibility, and do so quickly, as Starbucks has attempted to do. While retaining customers is critical, maintaining a favorable perception of your brand is equally important.

A significant crisis is an unfortunate but all too frequent occurrence. While we hope you never have to deal with a crisis, we believe that by gathering information, making a plan, being transparent, and knowing when to apologize, your organization can come out of the crisis intact, and in some cases, with more favorable public perception than before.