As the nation’s governors gather this week for their annual meeting in Washington, much of the talk, as usual, will focus on health care. Democratic governors, in particular, are putting forward proposals to make health care more accessible and affordable, specifically for those who still lack coverage. While Washington remains in gridlock, state leaders are moving ahead by using the tools available to them under the existing health care system.

Recent headlines have focused on Democrats’ move to the left. While the political rhetoric in health care revolves around terms such as “single payer,” “Medicare for all,” and “public option,” the reality of the situation is much less dramatic, but nonetheless significant. The substance of the proposed policies in the states consist of achievable and implementable measures that do not require additional federal legislation or creation of new federal programs. Rather, these proposals build on the policies and programs put in place in recent years, including the Affordable Care Act (ACA), and do not disrupt current forms of coverage that almost 92 percent of Americans currently rely on. 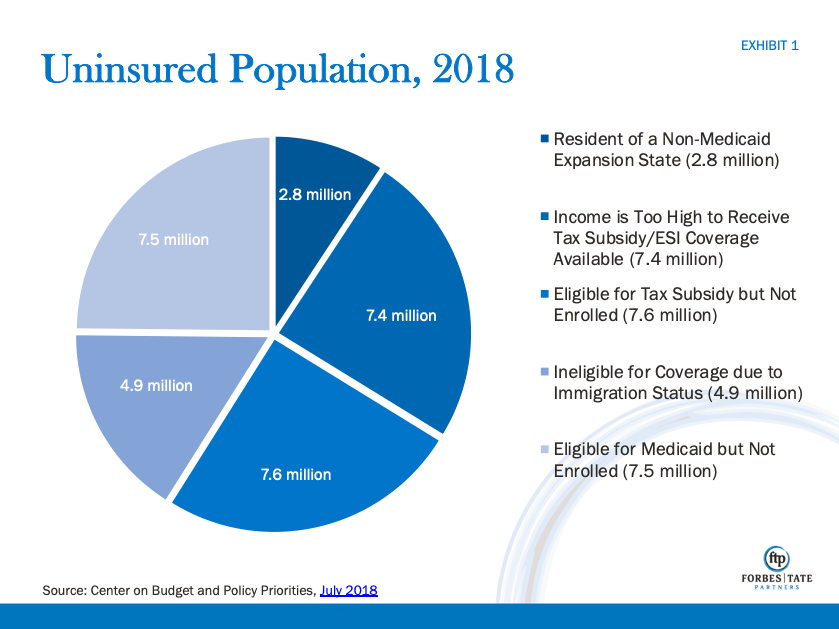 Despite gains over the past several years, there are still over 30 million individuals without health insurance [Exhibit 1]. Already in 2019, state and local leaders are taking actions that directly address segments of the remaining uninsured population. Taken together, they offer a range of solutions that could be implemented locally and cover the vast majority of the remaining uninsured.

With these new policy proposals, state leaders are directly addressing challenges, so all Americans have access to coverage. While at the federal level a stalemate persists on any new action on health care, these leaders are demonstrating significant progress can continue to be made today. And despite a flurry of new terms and charged rhetoric around health care, these proposals highlight the opportunity to make significant, demonstrable progress in access to coverage utilizing existing policies and programs.