Returning from Recess III: America First Put To The Test 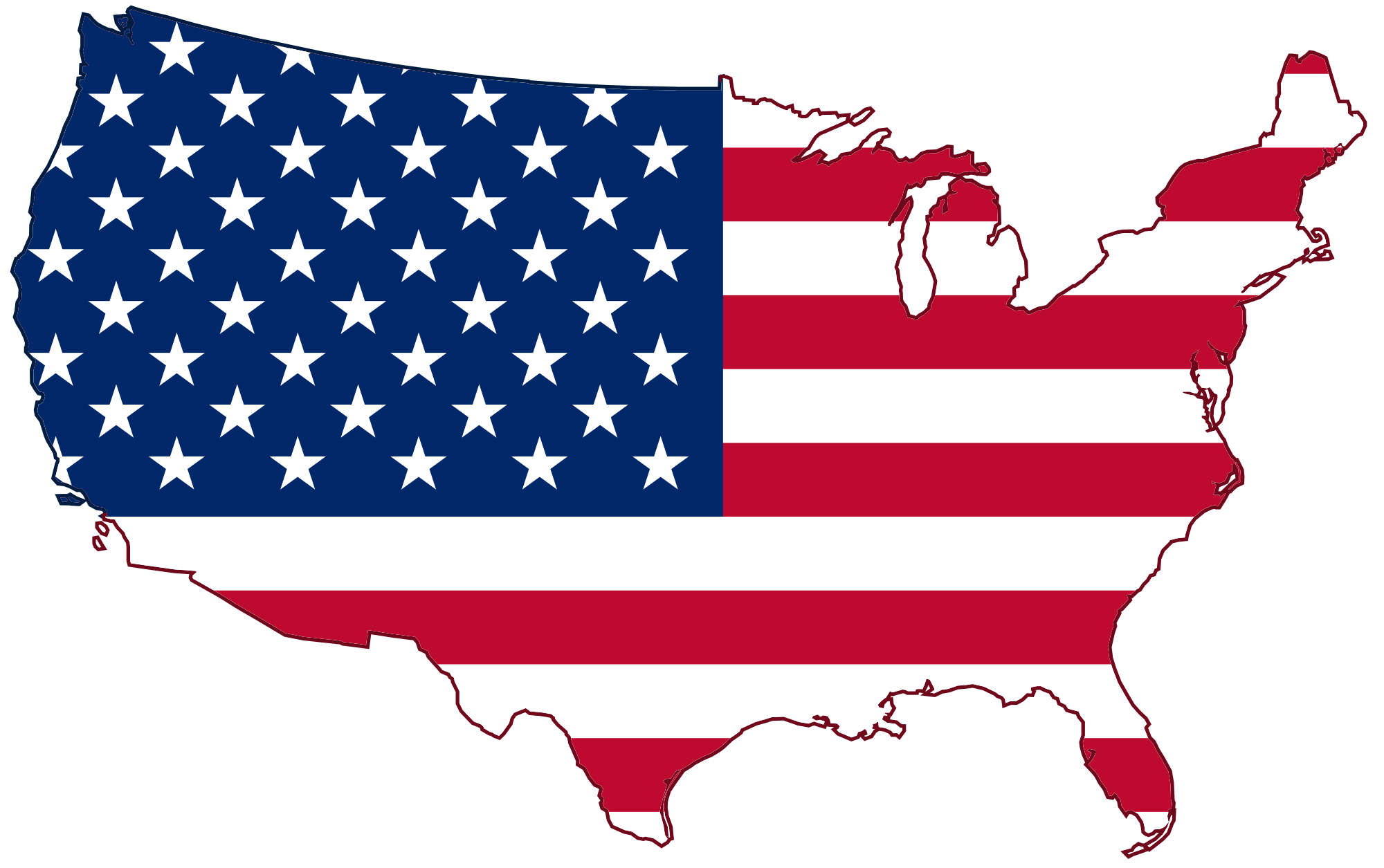 As we head into the fall, and towards the end of the fiscal year, Congress is already back in Washington with a packed agenda. If April recess brought the economy to the foreground, August recess was sure to bring a government spending plan front and center.

However, while rewriting the tax code and raising the debt limit are high on the President’s list of priorities, national security may also rise to the top.

While this plan delays the President’s threat to shut down the government to ensure funding for a border wall, the Administration might consider abandoning the plan altogether. A growing majority of Americans, including Republicans, do not support building the wall. According to a Fox News poll, only 3 in 10 Americans want a wall on the southern border, including 72% of Trump voters (Exhibit 1). In fact, only 36% of Americans, and 64% of Trump voters, think a wall is going to happen. 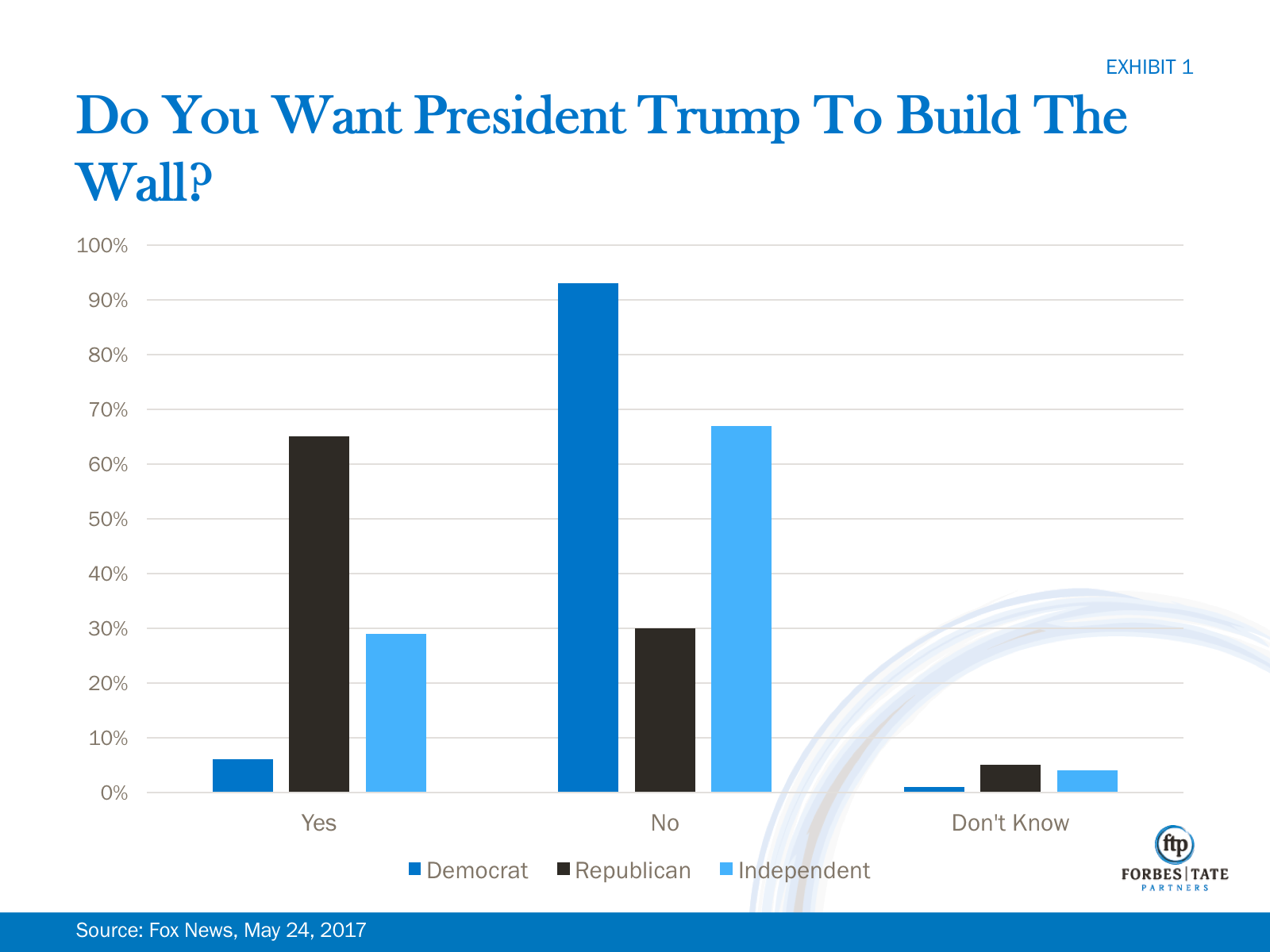 An earlier poll from Fox – one taken before the government needed to allocate funds to Harvey relief – indicates that most people don’t think Congress would even approve the funding that would be required.

With lawmakers back in session, Congress will also be briefed on the situations in North Korea and Afghanistan. After a recess filled with missile tests, Trump has felt increasing pressure to respond. The President recently said that military action is an option as Kim Jong-un gears up for another ballistic test – and just this weekend reporting on the subject became even more ominous, claiming Trump believes we only have two options with regards to North Korea. Unfortunately, Democrats and Republicans seem to be less than confident in the President’s ability to diffuse mounting tensions.

According to CBS News, 61% of Americans are unsure of Trump’s ability to handle the situation, including 22% of Republicans who say they don’t fully trust the President’s judgment in this area (Exhibit 2). 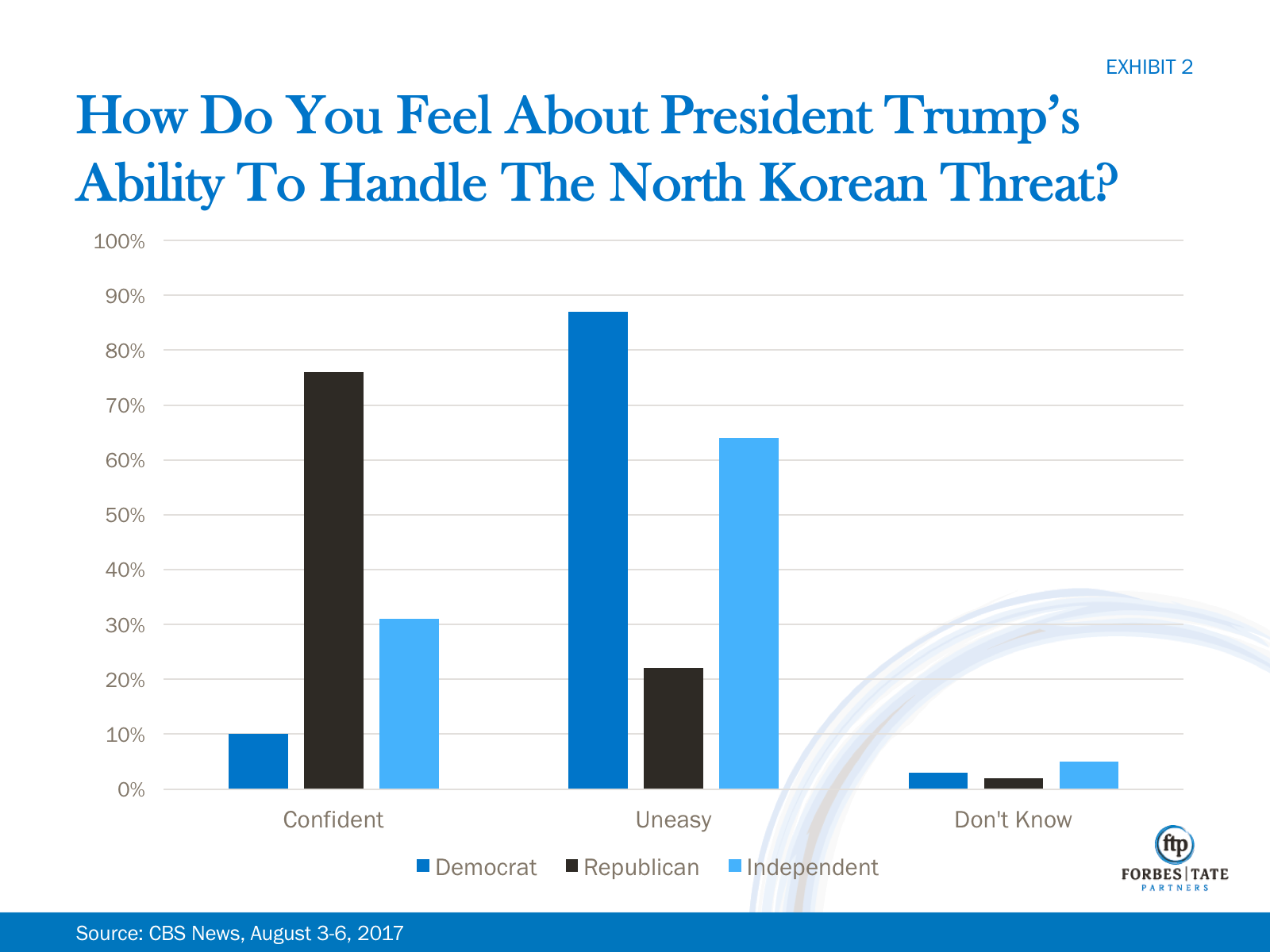 Another poll indicates that the country is split on whether the U.S. should take military action in response to the country’s recent weapons testing and development, a sentiment which seems to reflect the turmoil found within Trump’s own ranks.

Also during recess, President Trump introduced a new strategy for the U.S. war in Afghanistan, which included an increase in troops in the region. While Trump provided few specifics about his plan and the surge in commitment, Americans are already expressing discontent. One Politico/Morning Consult poll shows that only 45% of voters support increasing U.S. troop levels in Afghanistan.

Additionally, that same poll shows that while half of respondents agree with Trump’s refusal to announce how many troops he is adding to the war effort “so as not to alert our enemies overseas,” 34% thought the president should “reveal specific plans to the American people, who have the right to debate the best course of action.” As expected, backing for a troop increase is greater among Republicans than Democrats or independents.

Given the shift in the political landscape due to this season’s hurricanes, the Administration will need to work double-time to push its agenda around North Korea, not to mention keep the government funded long-term so that federal agencies can continue to help Americans rebuild their flooded homes.

A tall order like this will likely delay President Trump’s broad crackdown on immigration and the GOP’s ambitious plan to overhaul the American tax code.

If our elected officials were “vacation-ready” last month, they are sure to be exhausted by September’s end.